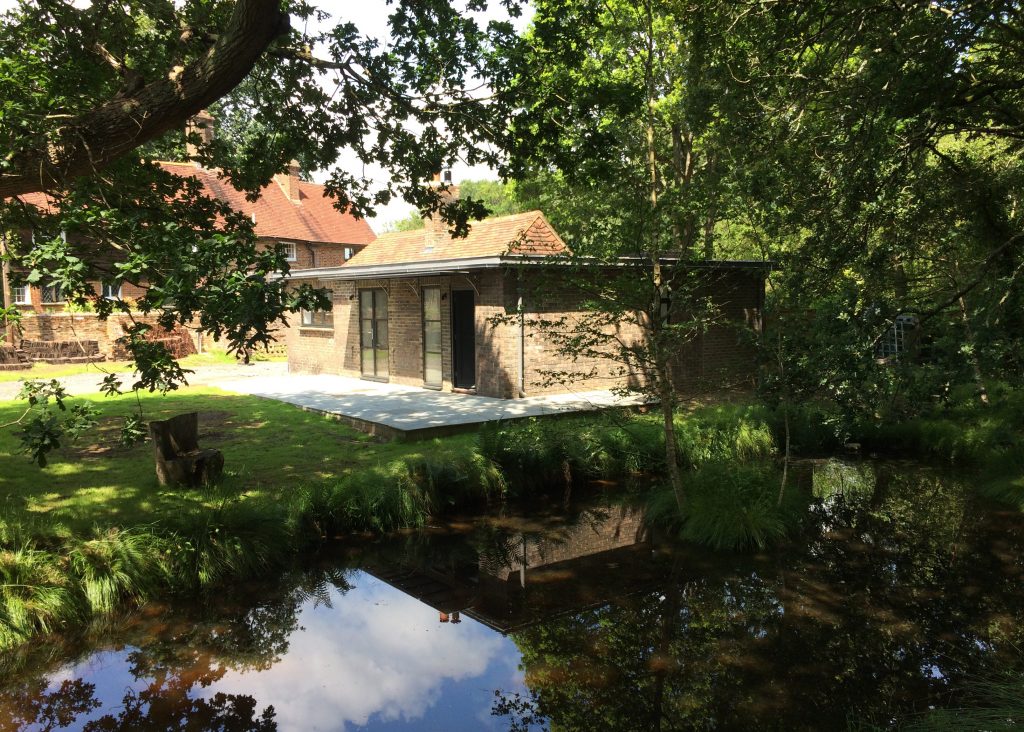 We received permission for a broad base of adaptation, development and conservation works at this rural Grade 2 listed building which has already been subject to significant development, some of it unsympathetic. The stated intention was to rationalise the entirety of the estate and to create a better integrated whole that benefits from an enhanced overall design and flow; as well as generating greater utility in terms of the use of specific buildings. The application was something of a mixed prospectus. A majority of its elements are simple and relatively uncontroversial, focused on the removal of undesirable recent modifications such as the sun room, for example, or the re/ordering of the contemporary extension, while others are fundamental in terms of their impact on the footprint and significance of this protected asset. The most obvious example is the creation of a new build extension, which has the potential to transform the way in which we read the building. The decision to opt for a contemporary design was considered by the Design and Conservation Officer as being both welcome and interesting, with the proposal considered to work well with, and complement, the original building without dominating it. The design also makes manifest the ongoing process of adaptation and growth that is inevitable in a building that has roots extending back to the mid-C16th, avoiding any instinct towards pastiche but ensuring ongoing conservation of the heritage asset. The application anticipates only a marginal loss of historic fabric, mainly concentrated on an area of wall, the effect of which operates at the level of less than substantial harm to the significance of the asset, and accordingly this is not a major concern. Where features are being replaced, as with the staircase, these are mainly contemporary forms and of no great worth in their own right. Indeed, the majority of modifications proposed relate to works on these later additions, and do not exert sufficient concern at the level of substantial adverse impact as to invite an objection. Renovation and Conservation works to the barn and outhouse reinforce the impact of the overall proposal, in the case of the former identifying a set of necessary repair works, and in the latter outlining a proposal to reclaim and offer new life to a redundant building.

Conservation and adaptation of Existing Dwelling

The works to the dwelling mainly affect a later two storey addition which was erected in the 1980’s. The only historic fabric to be lost was a small internal wall in the kitchen area, and a 1.6m length of external wall (including a window), to allow open access to the proposed extension. The staircase to be replaced is a later addition which does not merit comment in the Historic Building Record submitted with the application. As such, its loss and replacement with a more appropriate oak staircase was not considered to be detrimental to the character of the building. Likewise the removal of the northernmost chimney was not considered to adversely impact on the listed building as it was erected as part of the 1980’s extension and has no historic significance. The proposed extension is of a contemporary flat roof design with simple lines, and will project from the eastern elevation. It will be constructed from brick to match the existing dwelling, with a zinc roof with rooflights and modern ‘Crittall’ style metal windows. At 4.4m deep by 6.7m wide it is larger than the existing sun room (3.8m x 2.6m) but is proportionate to the size of the building, and will replace a current dilapidated structure which detracts from the character of the dwelling.

Conservation and adaptation of Existing Annexe

The annexe accommodation comprises a brick bungalow to the east of the dwelling which was converted from a cow shed in the 1950’s. It had a mish-mash of flat roof brick and timber extensions to three elevations, and was in need of updating and repair. It originally functioned as a two-bedroom, self-contained accommodation. The proposed works will removed the existing extensions and provided a single, unified wrap-around extension, with a zinc roof to match the extension proposed on the main dwelling. There will be a minor 4.8 sqm increase in footprint to allow for additional storage. The proposed works will not increase the living accommodation, but will improve the layout. As existing, the building detracted from the visual qualities of the main dwelling, being one of the first buildings to be seen when entering the site. The use of materials to match those proposed in the extension to the dwelling will provide a visually unifying factor which is considered to enhance the setting of the group of buildings, and will constitute an improvement over and above the existing panorama.

The barn is sited to the south of the dwelling. It is not listed in its own right, but is considered to be curtilage listed due to its relationship with the Grade II listed dwelling. However, it can be considered of historical significance, with the submitted Historic Building Record for the barn making clear that a large proportion of the barn (three bays) dates from the 17th century, with later extensions and an outshot dating from the 18th century. A single storey range extending from the northern elevation of the barn dates from the 18th century. As existing, the barn is in poor condition, with a galvanised, corrugated sheet metal roof and weather board elevations that are in need of refurbishment. The proposed works to the barn consist of ‘extensive repair and restoration’, the replacement of the corrugated roof with clay tiles , and the installation of photovoltaic panels to the southern roof slope. No objection is raised in principle to the works to the barn.

To the west of the dwelling, approximately 3.3m from the western elevation, is a small brick and tile outbuilding. Originally a wash house and privy. As a Conservation and adaptation approach it is intended to convert this building to a reading room. There will be no change to the footprint and, apart from the insertion of a deeper window, no elevational changes.

The i360 – The World’s Tallest Slimmest Observation Tower