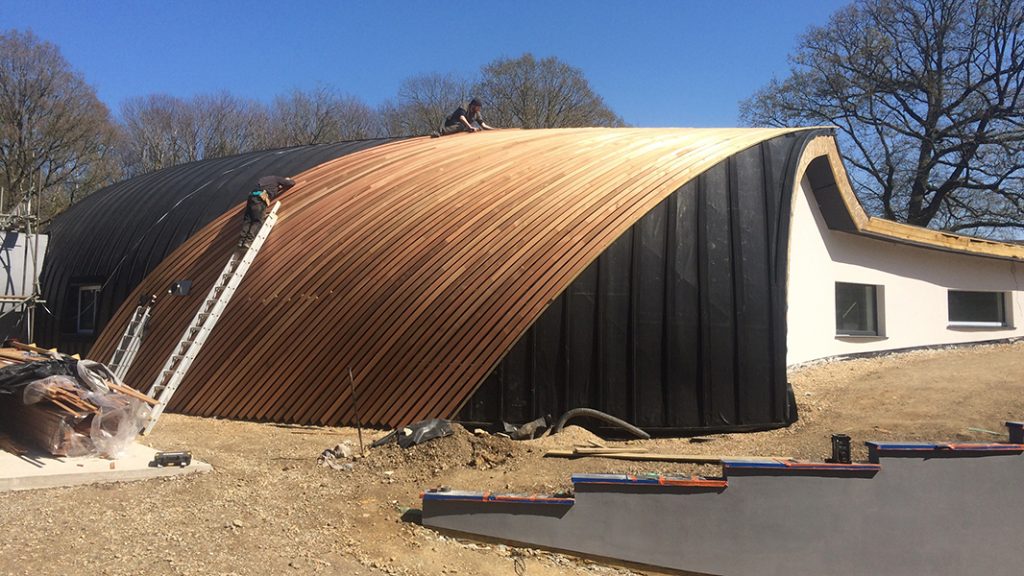 The scheme was designed on the basis that it is of an exceptional design and it therefore complies with paragraph 55 of the NPPF.

The building’s organic shape is an elegant form and its single storey/part sunken form/part sedum roof can be commended for helping to reduce its visual impact upon the surrounds. The surrounding woodland should also help it to be largely screened from the wider countryside. The mix of deciduous and evergreen trees and shrubs along the front boundary should also largely screen it from Turners Hill Road.

The entrance porch has been re-designed with a striking spiral circular canopy which works in harmony with the curved character of the building.

The building envelope has been improved with an extended curve of the roof and the re-location of the solar thermals from the flat roof to the upstand. This results in a more elegant-looking structure.

The interior has been re-configured with the plant room re-positioned to allow the main living room an easterly aspect.

The garage has been pulled away from the house and now has a more comfortable arrangement with it. The retaining wall previously shown on the Turners Hill Road boundary has been reduced.

In conclusion, The Urban Designer felt that the scheme met the provisions of paragraph 55, subject to several conditions (set out in my detailed considerations) to secure its design quality and sustainability credentials. The Planning Officer agreed with the conclusions of the Urban Designer. It was considered that the scheme is of a sufficient quality that it meets the criteria of paragraph 55 of the NPPF. It is considered that the proposal would enhance the visual quality of the site adjacent to the High Weald AONB.

Whilst the occupiers of the proposed house would be mainly reliant on the private car for access to shops and other services, the house does feature a home office that could allow potential occupants to work from home, thus reducing some car trips to and from the site.

By definition, a house that is being submitted under paragraph 55 of the NPPF is likely to be in a more isolated countryside location and therefore this in itself should not be a reason to resist the application.

As the scheme has been design to Passivhaus standards it will meet policy B4 of the MSLP and policy DP39 of the District Plan 2014-2031 Pre Submission Draft. The scheme would meet the Councils dwelling space standards.

On this basis it was considered that the scheme will meet the environmental role of the planning system as set out in the NPPF.