Bridleworth occupies a central location within Worth Conservation Area as the property boundary abuts the northern boundary of St Nicholas Churchyard which forms part of the curtilage of the Grade I listed building and is the focal point of this area. The southern aspect of the property enjoys views over the churchyard and towards the church. There are also key views of the church from the Worth Way across the open western part of the garden and Annex. 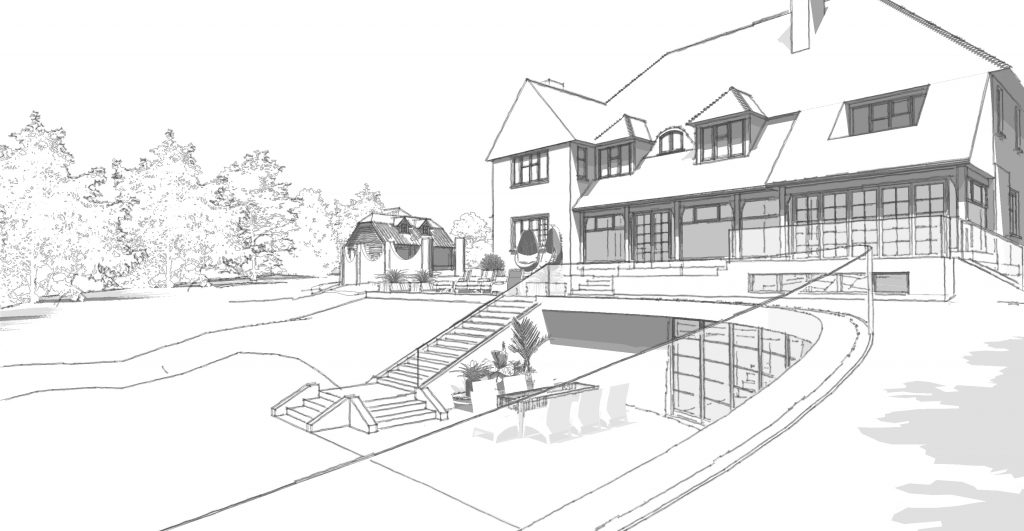 Annex in the garden

Planning permission was granted for the  a single-storey/sub basement level one bedroom annex which would be attached to the rear (south eastern corner) of the house.

The accommodation would provide at basement level a kitchen, lounge, double bedroom and bathroom and would be linked to the main dwelling via a stair from the proposed kitchen into the existing dining room on the ground floor.

A large set of folding double doors in the lounge would provide a form of direct access for the annex into the garden however, as designed, the main access to the annex is via the kitchen stairs into the extended dining room of the main house.

At ground floor the existing dining area would be extended to accommodate a glass floor to allow light into the kitchen below and a new rear terrace would be created. A catslide roof feature would be introduced over this extension creating a slightly recessed window for the first floor bedroom above.

ANNEX IN THE GARDEN

The design allows the space to function as further entertainment space for the main dwelling at some future point when the annex is no longer required – for instance a games room or accommodation for a Pool in the garden.

At one with the landscape

There would be no views of the development from the Worth Way to the north and the extension would not encroach into the public views and vistas of the church from this direction.

ANNEX FORMING PART OF THE LANDSCAPE

The Planning Officer considered that the spacious character of Bridleworth in its garden setting has been retained by the design and siting of the annex. Limited public views though the wooded rear garden boundary would possible from the churchyard looking northwards towards Bridleworth. From this angle, the proposed modest additions at ground and first floor level to the house would not detract from the character and form of the dwelling or its proportions in its well landscaped garden. The intervention would give the impression of a more extensive massing extending towards the churchyard boundary, however, it is considered that the form has been carefully designed within the existing garden contours so the result of this is that the annex would not appear overbearing.

Annex Forming Part of the Landscape

Bridleworth has a deep rear garden and while the annex would extend beyond the rear wall of the original dwelling by 14m, much of this massing is lost within the existing land form and at its closest point there would still be in excess of 35m to the rear garden boundary with the churchyard.

The i360 – The World’s Tallest Slimmest Observation Tower