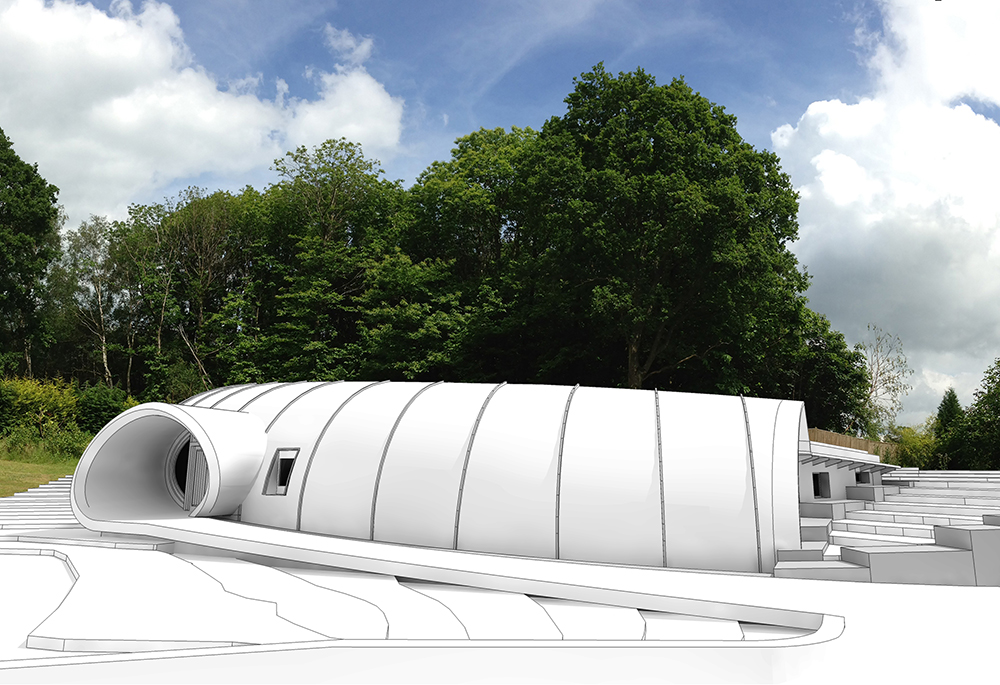 Prior to our appointment the client contacted Mid Sussex District Council in 2013 with a preliminary sketch scheme. The Council advised (quite correctly) that the scheme submitted would not receive the council’s support, but were of the opinion that as the site is located within the Countryside Area of Development Restraint Mid Sussex District Council would assess such an application against policies C1 and H11 of the Mid Sussex Local Plan and paragraph 55 of the National Planning Policy Framework (NPPF) 2012. NPPF 55 states that Local planning authorities should avoid new isolated homes in the countryside unless there are special circumstances such as:

Situated in West Sussex, south of Gatwick airport alongside a leafy country lane the site is set back from the road and partially obscured by mature hedges. To the North and East of the proposed site is an ancient woodland which was originally acquired by the Air Ministry at the beginning of the Second World War for sinking oil storage tanks underground due to the fuel stores at Gatwick and surrounding airports being extremely vulnerable.  The High Weald Area of Outstanding Natural Beauty is  a stones throw away, just across the road.

We were tasked with developing a scheme that could be considered truly outstanding or innovative to enhance its immediate setting. Using the topographical and arboricultural surveys we created a three dimensional model of the site, which was used to formulate a series of sun studies for the Solstices and Equinoxes. The days are longer around the summer solstice and shorter around the winter solstice. When the Sun’s path crosses the equator, the length of the nights at latitudes +L° and -L° are of equal length. This is known as an equinox. There are two solstices and two equinoxes in a year. The sun studies were taken at 8am , 10am , 12pm, 2pm and 4pm to give an overall expression and extent of the shadows that fell on the site. A combination of all the studies pinpointed the location on the site that attracted the most sun for the majority of the year.

Clearly this was the location for any Photovoltaic cells, Solar thermal panels, glass and thermal mass to absorb the suns free energy rays. Whilst also providing enjoyment for its future residents; by using ‘free energy’ as the main heating and power source the proposed house will act as an exemplar building for which Mid Sussex and the South East will benefit. Passivhaus design was adopted alongside the Level 6 of the Code for Sustainable Homes.

There are two main aims of the Passivhaus Standard

Passivhaus is an internationally recognised low-energy standard developed in the 1990’s in Germany by Dr Wolfgang Feist.  It is the fastest growing energy standard in the world, with over 40,000 buildings built in accordance with Passivhaus principles to date on all continents, the majority built since 2000.  The standard is being adopted in the UK and there are 30 or so projects that have been built in the last 2 years, but to date, none in West Sussex. Certifying a building to the Passivhaus Standard is a mark of quality assurance and at the time of this application was a method to determine its credentials as an exceptional and innovative design.

Our approach to the problem for the creation of an NPPF 55 house was to find a concept that made use of the sites sloping topography, the suns Rays and the wonderful distant views whilst also turning its back on both the Cold North Wind and the Road noise. After submitting the first of a series of amended designs the Design Panel agreed that the scheme’s sustainability credentials made the scheme a potentially innovative / ground breaking proposal. The building’s organic shape is an elegant form and its single storey / part sunken form / part sedum roof was devised to help to reduce its visual impact upon the surrounds. The surrounding woodland also helped it to be largely screened from the wider countryside; the mix of deciduous and evergreen trees and shrubs along the front boundary largely screen it from Turners Hill Road.

The Urban Designer made the following observations for the NPPF 55 scheme: –

In conclusion, The Design Review Panel considered that the scheme met the provisions of NPPF 55, as a high design quality and exemplary building with innovative sustainability credentials.