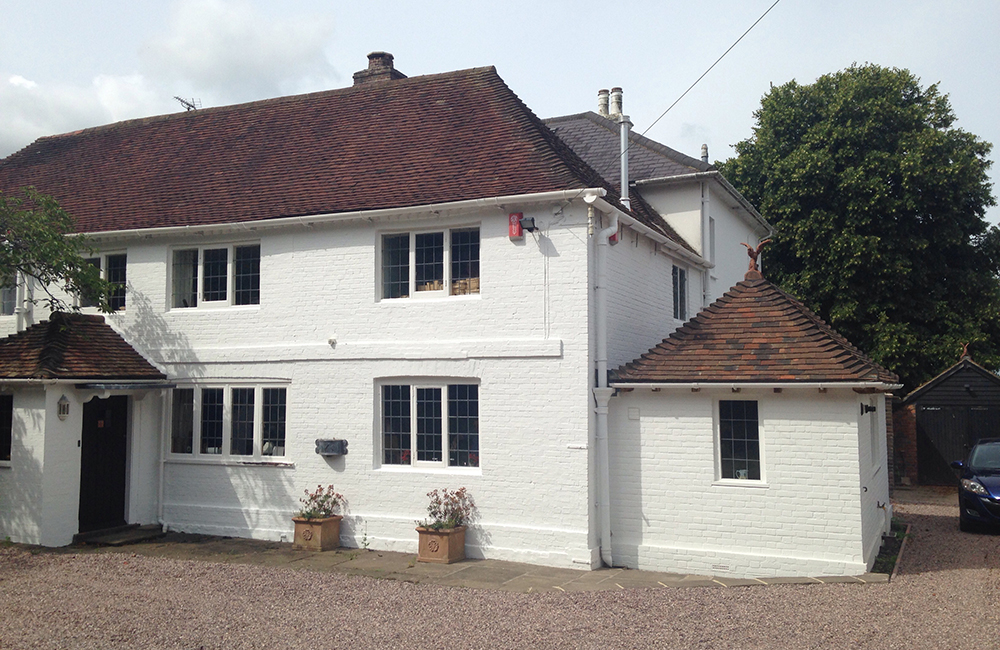 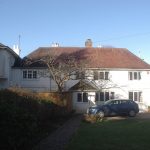 As Conservation Architects we were invited to The Old Manor House at the beginning of 2013. The previous owners had already undertaken numerous works to the property without gaining either planning or listed building consent. This included a loft conversion with staircase etc in the Georgian Western extension. 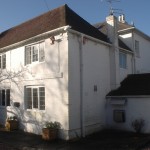 The current owners wanted to replace an Edwardian extension on the North aspect of the beautiful property, whilst also regularising the alterations to the attic space. They had already been told by the Conservation Officer that the council were unlikely to support any form of extension or alteration to the property.

On inspection DD Architects as Conservation Architects were of a different opinion. We believed that the Edwardian extension detracted from the character and appearance of the existing property. By understanding the significance of the property and arguing that alteration is not necessarily negative we believed ‘the right’ form would be acceptable. We did however advise that it might be a long and drawn out battle. 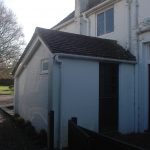 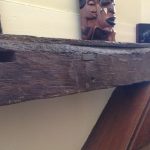 The Old Manor House and Ditchling Court lie north-west of the parish church, west of a large pond. The original timber framed two storey farmhouse once formed part of the Abergavenny estate. It was split almost down the middle to form two properties a few hundred years ago. Each property retaining one of the two staircases.

The properties were also extended to the South and West aspects, which almost tripled the size of the original farmhouse. The extensions also changed the character of the farmhouse to a grand Georgian style. These radical alterations probably took place as a fashion statement to copy the grandeur buildings on the coast. 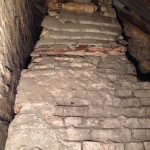 The Old Manor house retained a larger portion of the original farmhouse, which fronts lodge Hill Lane. Visually it still retains its character as a traditional farmhouse as seen from the road. Whereas Ditchling Court fronts Keymer Rd and has been almost entirely transformed into a Georgian style townhouse. It is however the Garden (West Side) of the Old Manor House that has been extended to transform its appearance into that of a Georgian Townhouse.

The last alteration to take place on The Old Manor house was a small Edwardian extension to the North of the property. This provided a further toilet and utility area for the kitchen. There was also a very awkward passageway to access the utility, which gave the impression of being original to the farmhouse. The Edwardian extension was constructed of one skin of brickwork and uninsulated. Being northerly aspect it was never in the sun and always a cold and slightly dark space. It was this part of the property that the current owners wanted to transform and modernise. It needed to be undertaken with care, sensitivity and a scholarly approach.

An Historical Analysis was undertaken by an eminent local historian accompanied by a drawn survey. Both being completed to a high standard of detail justifying a building of this stature. It was then time to put together a design that could be justified in respect of the existing buildings significance and win the councils approval. 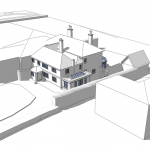 Gaining planning was not as straight forward as first imagined. We designed a very attractive Georgian style extension with a flat roof and lanterns. We also proposed removal of the wall creating the corridor and further minor internal and external alterations.

The local authority opposed the design as submitted for pre-application consultation. They considered that the existing Edwardian extension ‘could’ be of historic interest. They also required a larger set back than we originally envisaged and considered that scale and massing of the proposal would detract from the existing building by obscuring more of the ‘significant’ elevation than the ‘original’ Edwardian extension. 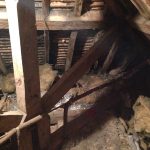 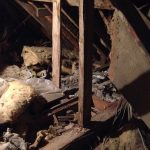 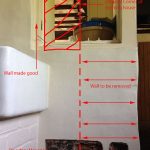 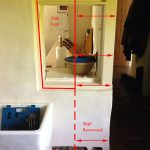 The council also required further justification for additional internal and external minor alterations. Understandably the council required evidence to prove that the alterations proposed would not remove ‘original’ fabric. We therefore opened up certain aspects of the building to show that the fabric underneath was not original, not significant or that the amount fabric to be removed could not justify refusal. 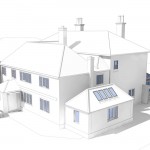 The scheme was then altered to reflect the councils objection to a flat roof with lantern. We incorporated a pitched tiled roof with conservation roof-lights. The roof-lights were designed to sit between the proposed green oak framed roof. This was designed to enhance both the interior and exterior of the property. The new oak framing of the interior would be exposed to compliment the existing property. A very simple, yet open roof structure was designed. The council insisted that the proposed four roof-lights should be replaced by one large roof-light. The further alteration was undertaken to gain planning and listed building consent.

Once consent was in place we submitted an application for the original Georgian design that was opposed at pre-application stage by the council. This scheme was set back 300mm from the original front East Elevation. After the allotted eight weeks this also received planning and listed building consent.

Once the approvals were in place we submitted an application to amend the original application to include a similar 300mm set back as opposed to the permitted 850mm. This had the added benefit of increasing the usable internal space without detriment to the original front facade.

As Conservation Architects we recommended a further application was then submitted for a pitched roof scheme similar to the original approval. This was tactical having in-depth knowledge of the planning system. The fresh application did however include four roof-lights between the rafters on the Northern aspect. This scheme was refused by the council, but was granted approval at appeal by the appeal inspector.

A further application was submitted during the appeal process for a pitched roof scheme, but with two roof-lights on both sides of the pitched roof. One pair on the Northern aspect and one facing The Old Manor House on the southerly aspect. This scheme was approved by the council.

Five schemes were submitted to the council for approval. Five schemes eventually received planning and listed building consent after one was approved by the appeal inspector. 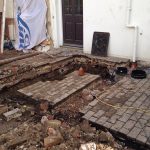 The tender process took place in July 2015 with a target commencement of September. A contractor was chosen quite quickly by the client and us as Conservation Architects and work commenced.
Demolition of the existing Edwardian extension took place smoothly with the removal of two separate floor slabs. 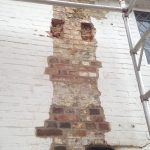 Initially, at the application stage, it was decided to retain the existing slender northern chimney. During demolition the decision was made to remove the chimney in its entirety and reinstate the original north elevation of the cottage. A further application was submitted for listed building consent, which received approval without difficulty. 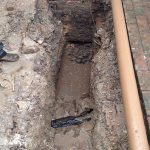 On digging the foundations we found that the local pond overflow pipe travelled directly underneath the exact location of the proposed extension. It also turned out that the soil was not suitable for a strip foundation. The scheme was therefore amended to include pile foundations and a ring beam for a number of reasons. The main reason being that if the pond overflow leaked at any point in the future it would eventually undermine the new foundations, not to mention the existing brick foundations. Separation between the existing and the proposed was crucial to ensure that the two buildings moved independently. This reduced the possibility of cracking.

Having located the pond overflow it was then necessary to cut it back to divert it around the proposed extension. This was carried out when the existing drainage was examined, extended and modified. 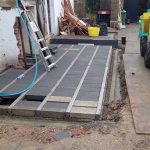 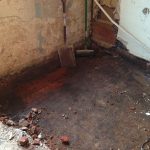 Whilst the kitchen floor in the main house was being removed/excavated the beam and block floor was added to the extension. The kitchen floor was removed to incorporate under floor heating. On removal the original brick floor for the original kitchen of the farmhouse was exposed. Great care was required to ensure that the original bricks were not damaged. It would not have been possible to remove and relay the bricks without both excessive cost and excessive damage.

The owners were keen to retain the brick floor, but felt that it would not be practical due to its damp condition. We therefore used glasscrete over the existing 16th Century brick floor. This both protected the floor and reduced the possibility of damp problems by inhibiting the movement of water through capillary action. On-top of this we used a lime based screed incorporating underfloor heating. The original brick floor was protected for future generations to uncover. 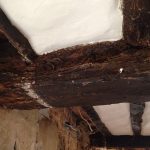 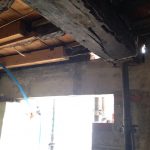 Our attention was then directed to preserving the original fabric of the old farmhouse. The ends of the original structural oak beams in the kitchen had deteriorated through both rot and insect attack. One of the beams was being supported by an unsightly concrete beam. In places the lime mortar and bricks had crumbled on exposing the origin fabric of the north wall of the Grade 11 listed cottage. English Heritage guidance is to retain as much of the original fabric of the building as possible. The oak beams were repaired by inserting a steel flitch plate inside the beam and filling any insect attack with epoxy resin. This returned strength to the end of the beam whilst also retaining original fabric. 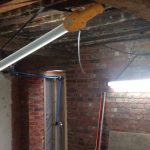 The original brick of the north wall was matched and rebuilt in places using reclaimed bricks and a mortar colour to match. English Heritage recommend that works undertaken by Conservation Architects is sensitive and retains as much original fabric as possible.

The Conservation Architects requested that the modern concrete beam was removed and replaced using reclaimed bricks and a reclaimed oak beam. 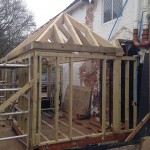 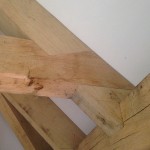 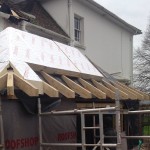 It was then time to erect the softwood timber structure in preparation for the green oak roof. Being green oak the roof was made to an incredible tolerance. The joints in the timber were almost imperceptible and initially looked like pencil lines. This was a credit to the joiner who constructed the oak frame. Painted plywood was fixed to the top of the roof. The whole structure was then wrapped to made it weathertight to stop the rain causing water damage to the oak frame. Oak sprockets were fixed to the oak rafters to hide the 150mm of insulation. Externally this gave the appearance of a traditional timber framed construction. 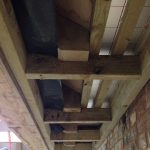 The gutter between the new and the existing buildings was designed to ensure that the proposed eaves were not broken. This therefore provided a continuous eaves line which ensured that the extension sat comfortably next to the parent building. This was constructed using a ladder of softwood with insulation above and between. Lead detailing and steps were made in accordance with the Lead Sheet Associations details. 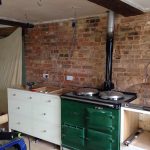 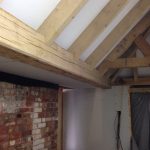 Work to the interior continued. The ceiling of the kitchen was over boarded. The external walls of the existing property were finished with insulated lime plaster. This allowed the fabric of the building to breath and reduce the possibility of damp problems. The North wall and construction for the bread oven was pointed and repaired and retained as a feature. 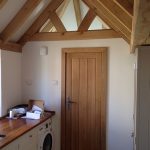 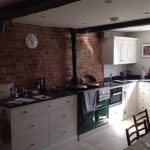 After the plaster and lime screed had dried out it was time to install the purpose made and beautifully crafted cabinets. The detail and expression of the oak framing coming to life as the plasterboard is fixed after electrical installation. 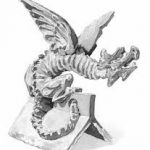 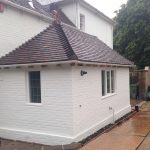 Limestone flooring, a handmade brick and limestone wall; and a beautifully crafter purpose made kitchen units all working together to create a finished product. Externally the bespoke Wyvern Finial finishes the traditional look of the handmade clay tiles.

Plumpton Pit Stop – In The Beginning